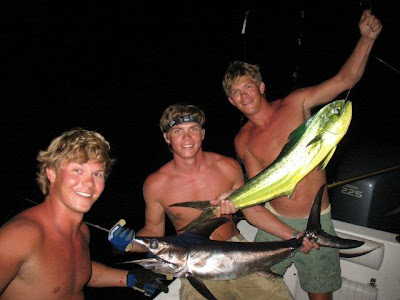 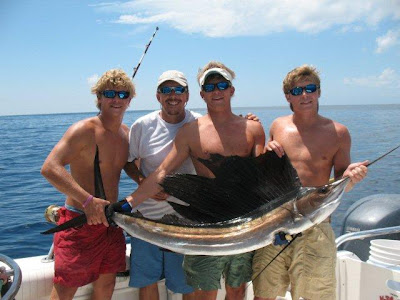 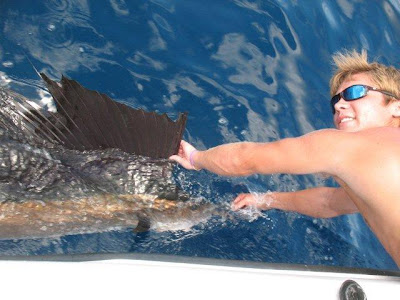 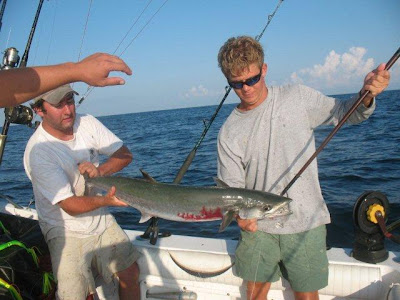 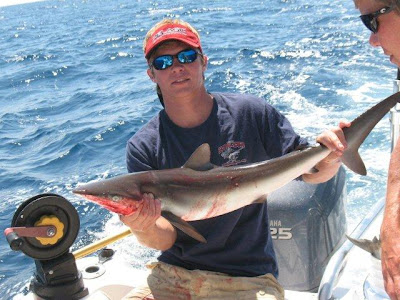 We headed out last Wednesday at 6 a.m. with myself, the boys and one of their buddies in hopes of catching the state record swordfish. We caught one last year that would have made the books if our “light” man Thomas hadn’t fallen asleep when Zack had the fish boat side 3 hours into the 5 hour battle or if Zack had manned up and not passed the rod off to Zane at the end of the fight– but that’s a whole different story.
We stopped at the R3 Navy Tower and caught a bunch of bait and then we trolled the 10 or so miles to the ledge. Shortly after arriving at the ledge we had a rod go off and Brendin grabbed it as the line was screaming off the reel. Within seconds a sailfish jumped out of the water trying to shake the hook. Brendin took his time and finessed it to the boat and Zane grabbed its bill and pulled it into the boat for a few nice photos. Once released, we continued to troll the area when the rod next to me went off. I had a hard time getting it out of the rod holder because the drag was set so tight. Once I got it out we saw a “large” fish turn sideways in the spread and he pulled loose of my hook. It looked like it could have been a blue marlin as the fish appeared to be several hundred pounds but it never came out of the water for us to confirm what it was. After that it seemed like we couldn’t get away from the barracuda except for the occasional bonita.
We headed out to about 1400 feet of water and had a go at day dropping for swordfish. On the third drop, Brendin hardly had a chance to put the rod in the rod holder when the rod tip started to bounce. He picked up the rod and it doubled over and the fish on the other end started to take line. We got the gimbal belt and shoulder harness hooked up and after about ten minutes of fighting the fish (holding on) the line went slack - BIG FISH. After another ten minutes of reeling, the bait finally came to the top and apparently hadn’t been bitten. We are speculating that a sword attempted to swat at the bait and got tangled in the line for a short while.
As the sun faded we switched our tactics to night fishing under a bright ¾ moon. We could see lightning to the North and South of us but according to our radar the storms were each about 20 miles away and pretty much stationery. Brendin was working two lines and Zane was working one. Brendin had several hits but couldn’t seem to hook up until the third time. The fish wasn’t putting up much of a fight as he was bringing it to the boat and we weren’t sure what to expect. Zane then said he had a fish on as well. When Brendin’s fish came boat side we could see it was a small swordfish and Zack leaned over and grabbed its bill and brought it into the boat about the same time Zane brought a mahi into the boat. It was pretty exciting that we caught a swordfish and a mahi at the same time. Swordfish need to be 47 inches from the lower jaw to the fork of the tail and this one was a few inches shy. We took a few pictures and released it back into the dark.
After setting out the lines again we notice the wind had picked up and the storms seemed a little closer. A quick look at the satellite radar and we could see that the storms were growing in size as well as towards each other. I wanted to head deeper to try to avoid them but majority ruled and we headed back in toward the ledge figuring we would fish there once we got out of the way of the storms. Unfortunately the storms came together into one big storm and began to move in our direction. We wanted to head West and eventually we were going directly North to try and stay ahead of the storm. It was filled with lightning and the boys sat and watched the light show as we ran for about three hours until the storm slowed and I was able to pull back on the throttles.
We were now in 80 feet of water and didn’t have enough fuel to make it back to the hungry swordfish. We made the best of it and trolled around the R7 Navy Tower for a short while and picked up a nice king mackerel and a few more barracuda. We decided to call it a day and we were back to the house by noon. The only thing the boys could talk about for the next few days was planning the next trip to try for the state record, again.
Posted by Paulos at 08:01 No comments: